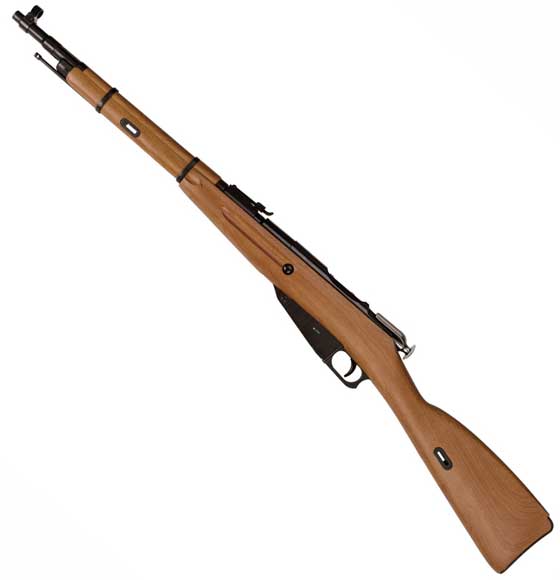 Okay, that’s Part 1 of the report. I can quit for the day. But I won’t. Today I’m showing something very special and you have to read the entire report to find out what it is.  It isn’t what you think.

I’m looking at the Mosin Nagant M1944 BB gun that several readers goaded me into testing. Two days ago I was sitting at my table at a gun show, and the guy next to me had the firearm equivalent of today’s BB gun on his table — a genuine M1944 Mosin Nagant carbine.. It was so attractive and compelling that I considered buying it! But you don’t buy an M1944 Nagant without a lot of thought. They chamber the massive 7.62X54 rimmed cartridge that’s the Russian equivalent of our own 30-06 round. In a standard rifle it’s a kicker. In a carbine like the M1944 that also has a very short pull and a large drop at the comb, an M1944 is the firearm equivalent of allowing a prizefighter to punch you! He might not knock you down, but he’ll definitely ring your bell! Knowing that, I kept my wallet safely in my pocket.

The first observation is that this BB gun is a very realistic copy of the firearm. When I first saw it in the box I was taken back to the M1944 I had seen at the gun show. The looks alone are enough to make it worth the price. Yeah — but can she cook?

According to the readers who asked me to test this BB gun, it is very accurate. One guy said it’s almost as accurate as a 499 — the world’s most accurate BB gun! That would be something. If it tests that way for me I can see this BB gun becoming a favorite.

The description online, says the M1944 BB gun weighs 8.21 lbs., and my balance beam doctor scale agrees with that. Wiki says the firearm weighs 9 pounds, even. Of course that will vary with the density of the wood. This one should not vary too much because the stock is synthetic.

The overall length is 40.5 inches and the barrel, which looks full length, is really 15.5 inches long. There is a long freebore (space inside the barrel that’s larger than the actual bore) extending out to the muzzle. It makes the gun appear realistic at the muzzle, plus it keeps the weight down.

The gun has a realistic folding bayonet. It’s the most useless and yet intriguing feature of the M1944 carbine, and the BB-gun maker, Gletcher, was wise to include it. It probably detracts from the accuracy, because attached bayonets often do. But from the standpoint of realism, it puts the BB gun over the top.

The folding bayonet looks and performs just like the one on the 1944 firearm.

The gun comes with a realistic web sling that’s as stout as anything the Soviets ever put on a firearm. It attaches to the gun by means of two genuine leather “dog collar” sling attachments that are perfect imitations of the genuine article. If they weren’t brand new and fresh I would swear they are military surplus.

The two leather dog collars are used to attach the web sling to the M1944.

I’m going to attach the sling in a future report and show you what it look like on the gun. If you are fascinated by Mosin Nagant rifles, this feature will bring tears to your eyes!

Mosin Nagant sights are rugged and utilitarian. And they work well. There is no windage adjustment beyond drifting the front post sideways, and I’m not certain that can be done on this BB gun. But in my experience, Nagant sights are usually spot on for windage. Unlike military rifles from some other countries, including the U.S., the Soviets paid attention to their sights. I bet that is a remark very few of you have ever heard, but I once owned a arsenal-refurbished 1917 American Enfield whose sights were off by several degrees — rotated by the arsenal after refinishing and reinstalling the barrel.

I have never seen a Nagant that wasn’t arsenal refinished — some repeated times! Yet all of them had sights that were spot-on. This BB gun is just copy, of course, so we will have to wait and see.

The rear sight adjusts just like the sight on the firearm. A slider runs up an inclined ramp to change elevation.

This BB gun is a CO2-powered repeater. It uses one 12-gram CO2 cartridge. Like many such airguns, most of the action (the parts that feed the BBs and the valve that powers the gun) resides inside this removable magazine.

The removable magazine is the heart of the BB gun.

The bolt cocks the gun, just like on the firearm. But it is FAR easier to operate! You aren’t fighting a massively powerful firing pin spring and cammed bolt lugs. All who have fired Nagant rifles know what I’m saying. Just know that this BB gun is very easy to cock.

This rifle even comes with what appears to be a cleaning rod — just like the original! This one doesn’t seem to want to come out, though. It’s cosmetic.

Here is the best part of today’s report. There are only 200 of these guns in existence! Only 200 were made. Yes, it’s a $300 BB gun now, but if they don’t make any more, how much will it be worth in 10 years — or 20? I come across things like this occasionally and experience has taught me to act when the opportunity presents itself. In 6 months you may not be able to get one.

There are more than 30,000 registered readers on this blog and easily many times that number are not registered. That many people can be reading this report. So if you want one, act now. That’s the very special thing I mentioned at the beginning.

I haven’t tested the gun for accuracy yet. If it tests as good as our readers say, then it’s worth the price right now. I promise you nothing, but watch this blog to see how it goes.

Read Dave Barham's review of QYS Pointed Pellets in this months issue of "Air Gunner". His view? "The Best Pointed Pellet ever Produced"!